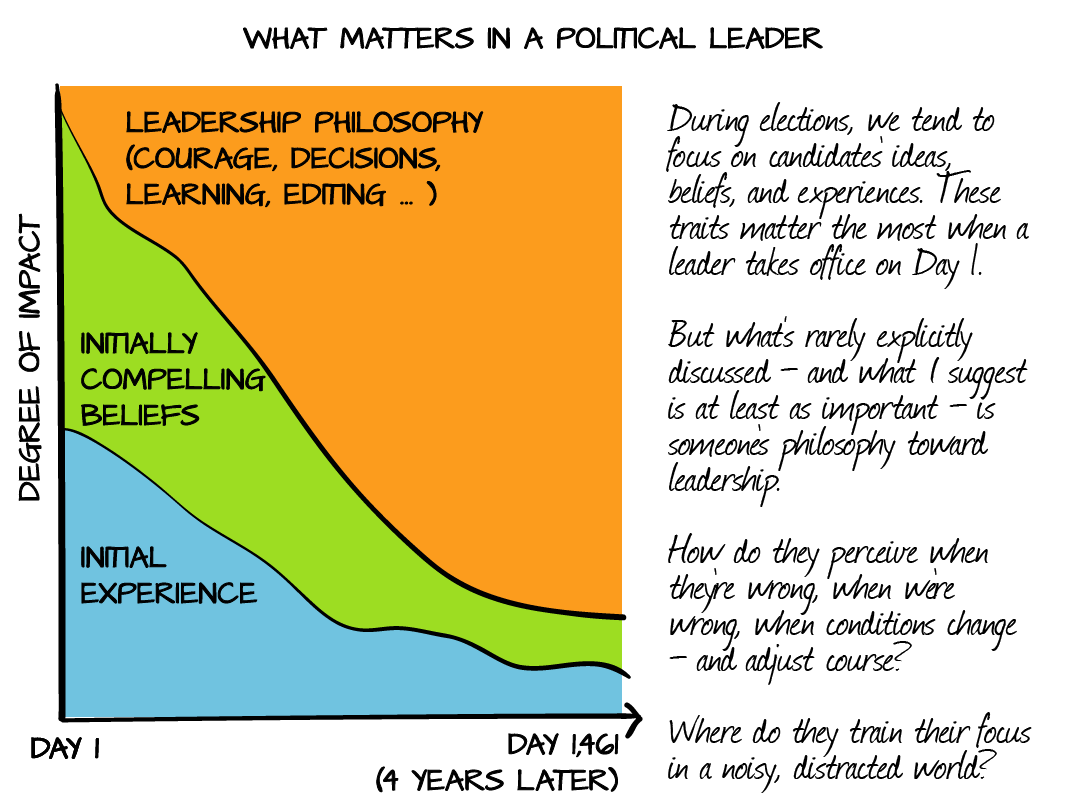 How should we select political leaders in complex and changing times?

As election season ramps up again, I find myself wondering more than ever before: how should I research the candidates?

This year, while facilitating a conversation among people who voted for Clinton and Trump, I’ve noticed that, even among people who’ve committed time to discussing different political worldviews, life gets in the way. Most can’t find the time to research every issue, or to talk it through—and many feel guilty or inadequate as a result. But given the unavoidable demands of our jobs and families, I wonder if this guilt is, in fact, a clue.

What if the way we’ve come to frame our responsibility as citizens—to be knowledgeable, detail-oriented voters—is in fact unrealistic and unsustainable?

(Note: a briefer version of this piece appears in The Evergrey.)

There’s some pressure to become armchair politicians during election season. How should Seattle move forward on housing affordability? On police accountability?

With so much at stake given Seattle’s growth, dialogue can often become stuck, with two sides pulling tightly at the same knot. We can agree that we have a housing affordability problem, while disagreeing vehemently on the solutions.

As the candidates debate specific solutions, we debate alongside them. But is this smart, or even sane?

It turns out that the more I learn, the less I seem to know.

Take, for example, the question of how much affordable housing to require in Seattle’s Mandatory Housing Affordability upzones, where city planners are allowing taller buildings in exchange for requiring developers to pitch in on affordable housing. Are we risking over-pricing the new requirement? Are we asking too little?

Despite five years in affordable housing development and pretty decent spreadsheet skills, I’m less willing than ever before to chime in with an informed opinion. With variable land costs, hiring rates, construction costs, investment returns, demand curves … I’d argue that outcomes are impossible to model.

It seems that we become pundits about problems and solutions mainly because we think that’s what we’re supposed to do.

To expect to develop confident opinions on policy direction now strikes me not only as unrealistic, but also profoundly disrespectful to policy scholars who’ve devoted generations of careers to understanding the intended and unintended consequences of crafted solutions. We vote as volunteers, not as professionals.

So I wonder: Does the wisdom of the crowd really work best when it hires political leaders based on policy ideas?

Re-Evaluating How to Vote

As the world changes ever more quickly and with more complexity, I’ve come to wonder if this level of policy micromanagement is not only stressful, but in fact threatening to long-term political stability.

The question of maintaining stability during rapid change brings me back to my engineering student days. Using the framework of self-correcting systems to think about this election cycle, I’m now looking for answers to two basic questions.

1. How does the candidate learn and adjust when they’re wrong?

2. When issues pile up taller than the day is long, where does a candidate train their editing and focus?

How Do You Learn?

Let’s look at a simplified model of how we move cars down the road, to start thinking about stable systems and control.

The Influence of Faster Communication

With candidates practically reading our thoughts in real time, we, as drivers, have a tighter grip on where the car goes.

It’s easier to see where this echo chamber can go wrong when we disagree with the sensibility. For example, when we don’t see the point of limiting immigration in the first place, it’s easy to perceive when that sensibility goes too far.

But it’s harder to see the echo chamber when we identify with the sensibility behind a policy move. In Seattle, for example, many of us want lifting the wage floor to have minimal unintended consequences for low-wage workers. It can become tempting to gloss over the complexity of the variables at play, because we really want it to work.

To be clear, the jury is still out on our minimum wage hike, which I’d supported. The point is that structural changes must stand up to the test of time. We’re iterating ideas quickly, but reality still takes time to play out. As we turn the wheel more sharply, we also run the risk of overcorrecting.

The Problem with Voters as Strong Drivers

There’s a case to be made that voters should be strong drivers. Voters are great at knowing when something is wrong.

We aren’t great at knowing which way to turn, though. A lot of energy goes into fighting over the steering wheel.

What if, instead, we looked for candidates who take a more experimental approach to their jobs? Those who will say, “I don’t 100% know where the next 4 years will take us. I think it would be good to try X right now, but am totally willing to consider that’s wrong. Here’s how we can evaluate X with an open mind, and here are some back-up ideas if we’re wrong about X.”

The Problem with Dogmatic Leadership

When we think it’s appropriate to be confident in the outcomes of our policy opinions, we tend to select leaders who are likewise confident. This de-stabilizes the system even more when we are wrong.

I believe that selecting leaders for humility, curiosity, and open-mindedness—in other words, for agility in learning from mistakes—is something that voters would naturally be good at. These are leadership qualities many of us already look for in our own organizations. Why not in our political leaders?

Note that I don’t necessarily think that humility is more important than the leadership traits we already discuss in politics, such as the ability to galvanize support or to make tough decisions.

But without constructively asking candidates to talk about experience in being confident yet wrong, we’re missing some critical questions in the hiring process.

If we spend more time in election cycles talking about how to be wrong, and not only how to be right, could we reach our objectives more smoothly?

Where Do You Focus?

Having a stabler system is just part of the process of getting to a destination reliably. We also need to consider: what is the destination? With so many interests competing for attention, what does progress even look like?

We each define success as a city in different ways, and your answer may vary from mine. I think of it in analogies to success in life: the power to achieve a vision, a community to share the experience with, the wisdom to slow down when you’re doing enough.

Success isn’t necessarily about always having more or doing more. It’s about having enough, doing enough, and knowing better. And so, the key objective changes as we move through life.

What will unravel the knot?

We have many issues that beg to be addressed, but like unraveling a tangled knot, it helps to keep coming back to one that might help make the other knots easier to get to.

Speaking for myself, just as an example: Right now, I think we’re at a point in time that calls us to deeply reckon with our history of racial exploitation and injustice. Like a childhood trauma, moving on will be tough, and feeling whole nearly impossible, without investing in this challenging and disorienting work.

And so, even though urban development dynamics is “my pet issue”, I’ve decided this election cycle to focus instead on finding out who’s likeliest to bring an awareness of racial reckoning and healing to every decision.

This question of “one important issue” is open to conflicting opinions, getting closer to our customary way of discussing issues during elections. The main distinction is to focus the discussion on what to solve for, rather than how to solve for it. Possible solutions would be brainstorms, not platforms.

Note that many potential goals aren’t immediately measurable, and in fact evolve with perhaps no end. But the crowd continually assesses, and its collective intuition tells us if knots are loosening or tightening.

Using this framework, I’d simply look for candidates who are likeliest to evaluate all policy decisions through the lens of impact on the critical knot—in my case, an intersectional lens—so that the collective impact over four years of widespread policy decisions is likelier to loosen the knot than to tighten it.

I’m not interested in certainty over how to proceed; I don’t think certainty is realistic. Instead, I just want a leader with enough focus to keep important goals on the itinerary in a highly distracting world.

If the crowd focuses its wisdom on identifying critical destinations, rather than steering instructions, could leaders navigate more effectively?

It remains important to talk about the things needed for success on Day 1.  But I suggest that as the world becomes ever more complex, we need to ask other important questions. Below are just a few ideas.

How will you learn?

What’s your practice for reality-testing and challenging your beliefs?

What are your parameters, once a light bulb goes off, for acknowledging unintended consequences?

Once unintended consequences are apparent, what are your procedures for correcting course?

What experience do you have in bringing crewmates along in a course re-direction, while maintaining morale?

How will you edit?

What single piece of wisdom do you hope we’ll gain collectively as a city in the next four years?

What single thing holds us back as a city from being more whole?

These questions aren’t just for the candidates—I think they’ll also to help us think as voters.

If voting knowledgeably on all the important issues is how we define responsible citizenship, it seems that we’ll need to leave a lot of busy, hard-working citizens out of that definition. As long as we remain part-time volunteer voters, it’s worth asking:

Here are some resources for researching candidates along this vein:

Feel free to post additional resources and suggestions below!