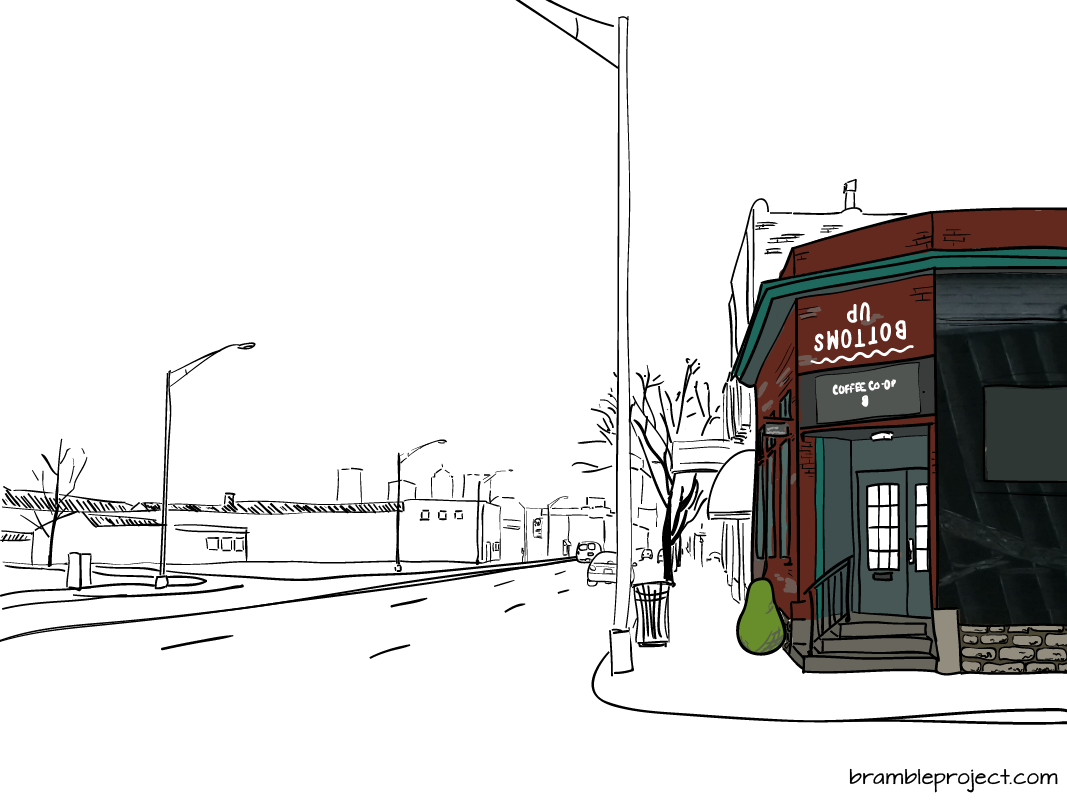 What counts as a thoughtful effort in a gentrifying neighborhood?

In Columbus, I set out to investigate a few different takes on socially conscientious development. I learned something about how hard it can be to write hopefully and pragmatically at the same time….

When I first wrote to Virginia Nunes Gutierrez and Victoria Calderón Nunes of Bottoms Up Coffee, I didn’t quite know if they would consider themselves developers. In 2016, they’d bought an old post office (which most recently housed a laminating company) and put $400,000 into extensively renovating the interior into a coffee and coworking space.

Bottoms Up was born when the sisters needed a co-working space for their social enterprise consultancy. It’s also a coffee shop that aims for affordable prices, while donating money and time toward community needs. A community health worker remains on site, so that families needing help can drop in anytime. The business responds to its location in the low-income but changing neighborhood of Franklinton, and emerges from layers of influences in the sisters’ lives.

They financed the project through Small Business Administration Loans, facade improvement funds from the City Council, personal savings, and traditional bank loans. Victoria tapped into her previous experience in community investment for connections to developers, funders, and city staffers who could advise and assist with the project.

Over coffee, Victoria quickly mentioned the barriers they faced as first-generation Venezuelan immigrants and women: not knowing what resources were available; facing doubt from others that they could pull it off.

And yet, being unconventional developers also had hidden strengths. They began by having a mural painted on the outside of the building, commemorating two houses that had stood on the site before a flood in 1916. This drew attention, and firemen working across the street began stopping by to help out. When they posted photos on social media of themselves chiseling away at the old wall, covered in demolition dust, someone brought in a jackhammer and helped expose the brick wall.

Click here for a tour of the interior and here for more on their mission.

One of the key motivators for Bottoms Up’s social justice goals was the high infant mortality rate in the Franklinton neighborhood. This reminded me of the correlation that had once surfaced between infant mortality and income inequality.

These caveats aside, it’s nonetheless interesting to note that Columbus ranks among the highest in the nation in both economic segregation and infant mortality. This seems significant in the context of Franklinton’s shifting demographic. The neighborhood’s infant mortality rates might improve, for example, simply if the poor are priced out. That, of course, wouldn’t solve the problem of either economic segregation or infant mortality, but it could make the statistics disappear locally. Bottoms Up will need to be mindful of this in tracking the success of their efforts.

Further down Broad Street, closer to downtown Columbus, is a project underway by Kaufman Development. The architectural rendering really stands out, particularly when compared to the street as it looks now. The project is getting $1 million in City funding to set aside 15% (or 36) of the 234 total planned units for people earning up to 80% of Area Median Income.

Emboldened design often signals a developer who’s fascinated by cities and not just by profit. Brett Kaufman fits this storyline, beginning college as an architecture major before switching to urban planning. “The economics of Columbus’s market don’t let us do whatever we want, but we keep trying to push it.”

“Spiritual, in a personal way.”

“Design is a big component of my personal interests,” Brett continues. “The design is aspirational. We want the community to be spiritual, in a personal way.”

Facilitating Community within the Building

What intrigues me about Kaufman’s approach is Brett’s focus on nourishing the communities that take up residence within each building. There’s something in his approach that resonates with what had initially brought me into development—a sense that modern apartment buildings can be alienating, anonymous experiences, and that thoughtful design and management can help make neighbors out of the strangers next door.

For Kaufman, what began as wellness programs for residents has evolved into online portals that help neighbors connect through field trips and volunteering opportunities. Ideas brewing for the future include speaker events, dinners, and a business center turned incubator.

Facilitating Community within the Neighborhood

Kaufman’s volunteer portal, run by local social welfare platform Besa, has potentially interesting impacts when considering the fact that this project will be sited in a changing, currently low-income neighborhood.

There has been plenty written on the phenomenon of middle-class residents moving into low-income neighborhoods but not getting to know their new neighbors. Sociologist Tim Butler, working in London, calls this a treatment of diversity as “social wallpaper” but nothing more.

If, through volunteer opportunities, Kaufman’s project nurtures in its new residents a complex understanding of, and appreciation for, those who already live here, Kaufman’s active approach to residential programming might soften this “social wallpaper” effect. As with Bottoms Up, a deep intention will be needed for success to be meaningful.

The City might contribute up to nearly $4M into their project toward streetscape improvements, public parking, and affordable housing.

“We’ve had to baby-step our way into this.”

“I’m trying to prove that you can create value by being more thoughtful,” says Brett. “That we can create impact to the mind, body, and soul, and that has real successful economics. We’ve had to really baby-step our way into this with lenders, investors, and others, but seeing it work and getting the support from those that understand our vision has been fun.”

Something that Brian and I are trying to achieve in our thinking is the right balance between hope and critique. In this marketing-habituated world, it’s easy to err broadly on the side of hoping that a development can have only positive outcomes. In this equally cynical world, it’s also easy to land too heavily on the side of critique. Both come at a cost.

Many developers and neighborhoods have already tried and failed to get “gentrification without the negative”. Over-emphasizing hope can breed cynicism when unintended consequences surface.

And yet, focusing on what isn’t perfect tends to put the most pressure on hopeful pragmatists who are trying to do better, while unfairly sparing those on the profiteering or ideological extremes who frankly don’t give a damn what we think.

So far, in writing publicly about developers, I’ve found it surprisingly difficult to strike the right balance between marketing fluff and deflating critique, and to remain in the middle fertile ground for fruitful ideas. The two extremes feel safer, where I know I’d have company.

Isn’t that interesting? If it’s tough to even write about cautious hope, how on earth do we expect to encourage developers to navigate thoughtfully in this space of pragmatic creation?