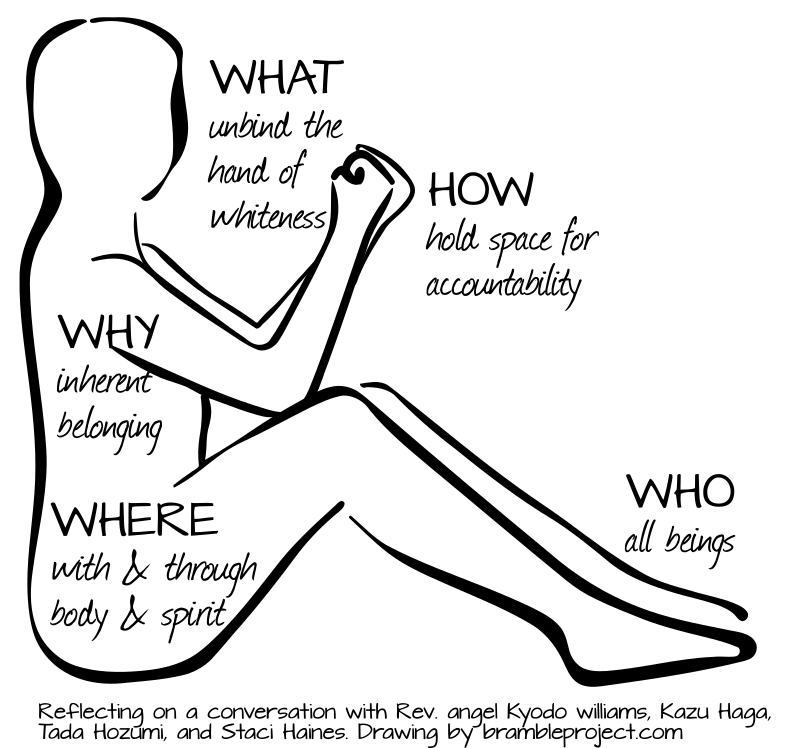 What does societal healing mean? What will it take?

I’m steeping in the wake of an impossibly rich conversation with Rev. angel Kyodo williams, Kazu Haga, Tada Hozumi, and Staci Haines—some of my most inspiring and courageous teachers in the intersection of individual and societal healing. Thanks to the folks at Building Belonging for handing me an opportunity that I hadn’t even imagined for myself.

I’m now trying to write about it two days later, which is only 2x the time it took me to come down from being completely starstruck and without exaggeration 100x faster than I typically process anything as rich and complex as this conversation was.

I’m hosting a follow-up community discussion next Tuesday (August 18, 9:30-11:30am Pacific Time) for those who have watched the video and want to be in community with others who feel likewise sparked by the energy this conversation generated. So far we have over 90 RSVPs—and I want to write these early reflections in support of us marinating in conversation together.

So, here goes. What follows is less of a summary, and more of a draft of the tapestry weaving in my mind as I reflect on the interconnected threads of conversation.

The role of spirituality in healing: as a resource to heal trauma (Staci), as a door to liberation through finding our belonging to everything (Rev. angel), and as a lens for understanding trauma and healing patterns (Tada).

How our healing must be grounded in our bodies as well: to understand our suffering bodies in the context of a cultural body that’s suffering (Tada), to ground in the breath as a core measure of value (Rev. angel), to liberate ourselves in ways that thought alone cannot (Staci).

How belonging is a need in our body (Rev. angel, Staci) that can be either healing, by driving us to repair relationships (Kazu), or traumatizing, when we are steeped in weaponized, conditional belonging (Kazu, Rev. angel, Staci).

The clenched hand of whiteness

Rev. angel’s reflection that white people are themselves trapped, and must emancipate themselves, from the hand of whiteness. Staci clenching fists as she spoke of whiteness holding on to an identity of safety, belonging, and dignity rooted in racial domination.

Kazu offering that when we hold people accountable, maybe the operative word is “hold”: holding space for them to find their own accountability, because we can’t force someone to become accountable.

Putting these together made me think of the generative somatics practice of “blending”. As a demonstration in a recent online class, Staci had asked us to make a fist with one hand, holding an intention to keep that fist clenched. And then, with the other hand, to hold the intention of trying to pry apart that fist because we don’t want it clenched anymore. For most of us, our fist clenched tighter.

She then asked us to stop trying to pry apart the fist, and instead to curve our spare hand around the fist, in the general direction of the fist, with about 25% of the force of the fist, in a gesture of support. For most of us, the fist started to relax.

Could this be a somatic metaphor for what “holding space for accountability” might look like in practice—to counterintuitively blend with, rather than fight against? And yet at the same time, Staci shared a story where a conditioned tendency of appeasing can also obstruct our power to change a situation. So, there’s definitely more complexity to unpack here.

Emancipation from the clenched hand

A few things that become trapped in the hand of “whiteness”, and some takes on what liberates them:

White people themselves, who are not evil. Emancipate with:

Individual healing work that only helps us maintain and sustain within an oppressive, corporate system. Emancipate with inquiry:

Societal change work that remains trapped in existing paradigms of:

All four people’s stories included the transformation of pain into healing wisdom. I think this is a common pattern, and one that I mentioned in my last post as a hint of our potential in American culture: to build a healing wisdom as powerful as the pain we’ve been through.

I’m quite certain that I’m in this country for an ancestral reason, the path for my migration here paved by Black-led social movements and I, in turn, here from a culture of decades of unsuccessful revolution, to learn from a lineage of successful social change.

The blending of lineages in the conversation, and in my own life, nudges at an old question for me: what could be the role for Asian healing modalities in the West?

On the one hand, I don’t believe that a people can “own” a culture, any more than I “own” my ideas—which are, after all, a blend of ideas sourced from others, and inspiration from a universal source that I cannot claim as mine. On the other hand, and Tada echoed this, I sure can get triggered when these ideas are shared in the context of a dominant culture with a history of commodifying, erasing, and taking ownership of what is not theirs to claim.

I was fascinated by Tada’s offering of thinking about these healing practices as their own animistic beings with their own intention, replicating themselves through Western capitalism—which, even as it can frustrate us , might also be the spirit of the practice, and of our ancestors, working for their own ends.

But to what end? As Tada and Kazu noted, Asia also has a millenia-old history of colonialism. And Staci and Rev. angel made clear that healing can be misused simply to help us sustain ourselves in a broken system. Are these linked in Asian healing? Has Asia used healing modalities to help ourselves sustain our colonial systems as well?

I haven’t gone as deeply into my own cultural history as Tada and Kazu clearly have, but I’m ethnically Han Chinese, and we are the colonizers of China. What I have been most curious about, with Asian healing modalities, is where they have failed. Even though it’s said that Lao Zi wrote the Daodejing, a foundational text of Daoism, after getting fed up with the corruption, waste, and destruction of his time, China is not too far off from those descriptions now.

Was China missing the piece around societal, and not only individual, healing? And how can we learn from that, so that we might not walk the same path here?

I think Kazu offered an important piece of the answer: to think of relationship-oriented nonviolent direct action, when combined with trauma healing, as a modality of societal healing. Here, that might mean blending the healing modalities of our multiple cultures with a practice modeled by Dr. King, who descended from enslaved Africans and studied European philosophers and Gandhi, who in turn drew from his own spiritual lineage in India—all to heal traumas imported to this continent by Europeans carrying their own systemic pain.

What wisdom might it be our labor to emerge, in the background of this rich lineage?

3 Replies to “Reflections on Societal Healing”